Crosses at the Wall 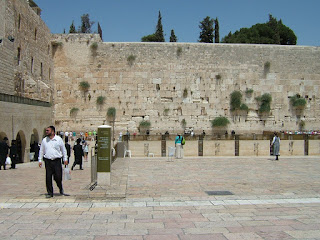 There is yet another controversy brewing in the city and country seemingly filled with controversies. The pope is planning a visit to the State of Israel. The rabbi (Shmuel Rabinovitch) in charge of the Western Wall has ruled that Pope Benedict should not wear his cross when visiting this Jewish holy site. This is absurd. How is it that the pope's beliefs impinge on my beliefs or his practices on the sanctity of my holy place? Let the pope come to our Western Wall and offer a prayer. Let him pray to God as he as always done. Let him wear what he always wears. It does not lessen my faith. We will be doing more to honor the history of hatred and enmity between us by allowing him to be an authentic representative of his Christian faith than by asking him to hide his cross. I remember the previous Pope Paul's words at the Wall, said some nine years ago this month: "God of our fathers, you chose Abraham and his descendants to bring Your name to the nations: we are deeply saddened by the behavior of those who in the course of history have caused these children of Yours to suffer and asking Your forgiveness we wish to commit ourselves to genuine brotherhood with the people of the Covenant." I also remember Rabbi Melchior's words said to the visiting pope at that time: "For today we commit ourselves to end the manipulation of the sanctity of Jerusalem for political gain. Jerusalem must reject hatred, struggle, and bloodshed, and be again the 'City of Peace' and a source of holiness." Those were of course different days but I still say, even after 9-11 and the Second Intifada, Amen!