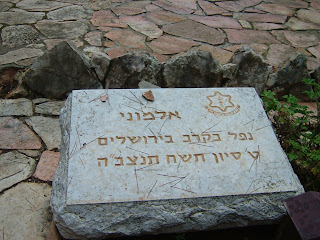 This evening begins Yom HaZikaron--Israel's Memorial Day, when we remember Israel's fallen soldiers. The gravestone above sits at Har Herzl--Israel's military cemetery in Jerusalem. It reads: "Anonymous/Fell in the Battle of Jerusalem/9 Sivan 5708 [June 16, 1948]/May his soul be bound in the bond of life." In the War of Independence Israel lost over 6,000 soldiers of a population of approximately 800,000. In all Israel mourns 22,570 soldiers. Israel paid, and continues to pay, a high price for its freedom and security. (133 died in the past year.) I remember the first time I visited Har Herzl. Unlike Arlington where one is overwhelmed and awed by the vastness of its grounds, Har Herzl makes you gasp because it appears small but is in fact deceptively large. It is terraced and built into Jerusalem's hills. There are a hundred graves here and another there and then even more around another corner. With each terrace one confronts another of Israel's wars: the dead from 1967 and those from 1973, from Lebanon and the Sinai. You think that you have completed your tour of the grounds only to discover another terrace with more dead. And then one day I stumbled upon an empty terrace, as if waiting to welcome more young sons and daughters. The empty spaces of New Montefoire make sense. One day, after many, many years, every one finds his/her way there. The empty terraces of Har Herzl do not make sense. They should not make sense. They must not make sense. Let no more terraces be cut in Jerusalem's hills. Let no more young children die to defend our land... Let our small patch of land and its people know peace.
For a poignant reflection by Rabbi David Hartman about Yom HaZikaron and Yom Haatzmaut (Independence Day) read this.