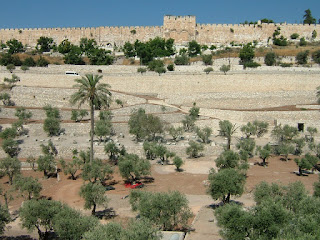 Today our group traveled to the Mount of Olives and in particular to the churches and cemeteries on the east side of the Old City. On top of the mount is what may be called the holiest Jewish cemetery. Here such Jewish greats as Ramban (Nachmanides), Menachem Begin (prime minister), Shai Agnon (Israeli Nobel laureate) and Rabbi Abraham Isaac Kook (first chief rabbi and mystic) are buried. Here Jesus spent the evening with his disciples before his crucifixion. Although it is in the heart of East Jerusalem it provides an extraordinary view of the Old City, the slope of the mountain gives the impression that one is peering into the confines of the city's walls. From this vantage point the golden dome of the Dome of the Rock, the silver cupola of the Church of the Holy Sepulchre and the new, white gleaming dome of the Hurva (Ramban) synagogue now being rebuilt can be seen. For more pictures click here. As one walks down the hill one moves from a Jewish cemetery, to Christian graves and churches to Moslem graves. Each successive ruler built their cemetery closer to the walls, although Zechariah's enormous grave is located in the valley. The gates to the Old City in the picture above were covered by Muslim conquerors because it was through these gates that the Jewish messiah would enter after resurrecting the dead on the Mount of Olives. (I never really understood why a messiah would be turned back by bricks, but such has always been the politics of this place.) It is for this reason that this mount continues to hold special power over Jews. Here they will first experience the redemption and therefore be the first to be resurrected. I have never felt the pull of such graves. History has its pull, but not graves as holy places. It is instead the living, bustling city, that continues to serve as the holiest of destinations.