March 24, 2011
I cannot stop thinking about Hadas Fogel.  Three month old Hadas was murdered along with two of her siblings, Yoav and Elad, and her parents, Udi and Ruth, in a brutal terrorist attack.  They were stabbed on Shabbat evening, March 11, while sleeping and relaxing in their home.  The other three children were not at home.  I don’t understand how someone can think that the murder of an infant is justified.  I cannot fathom how one can justify the murder of another human being.
Recently our confirmation class visited the Holocaust Museum in Glen Cove.  One of the pictures there haunts my memories.  It is of a soldier from one of the Einsatzgruppen units shooting his rifle at a mother holding an infant child.  The Einsatzgruppen were roving killing units who traveled through German occupied territory murdering over one million Jews, during the early years of the Holocaust prior to the Nazi’s construction of death camps.  This picture haunts me for two reasons.  These soldiers were told that they would not be penalized if they chose not to participate in the killings.  But few, if any, decided not to carry out these gruesome murders.  The other reason is that the photograph could only have been taken by a fellow soldier.  It was taken by someone who was proud of these murders.  It was taken by someone who celebrated the murder of children.
It was reported that in Rafah, in Hamas controlled Gaza, people handed out candy in celebration of the murders of the Fogels.  Palestinian Authority Prime Minister by contrast was quick to condemn the murders.  Still the Western media said little about this terrorist act.  It was of course understandably preoccupied with the tragedy in Japan.  I grieve as well for the people of Japan, yet why so little mention. When newspapers and television news shows did comment about these murders, they often characterized the yet to be apprehended terrorist as an assailant and the victims as settlers.
But Hadas, Yoav and Eldad, Udi and Ruth are human beings.  The woman and her infant held tight to her breast are human beings.  They are not caricatures.  The notion that they were threats is barbaric.  Stripping them of their humanity gives license to murder.  To have misgivings about Israel’s settlement policy, or even to oppose this policy, must never be used to dehumanize those who live in Itamar or Kedumim, Efrat or even Kiryat Arbah.  Nothing can ever forgive such brutal murders.  Only yesterday a suitcase bomb exploded outside of Jerusalem’s bus station, killing one and injuring 50.  Since Saturday rockets have again been fired from Gaza at Israeli towns.
Two weeks ago the Palestinian Authority’s TV network broadcast a show celebrating the life of Ahlam Tamimi, the woman who drove the suicide terrorist to the Sbarro pizza restaurant in August 2001. 15 people were murdered in that attack, seven of them children.  Murder is murder.  And last week in Al-Bireh, a West Bank town near Ramallah, a square was named for Dalal Mughrabi who directed the March 11, 1978 hijacking of two Israeli buses in which 38 people were killed, including 13 children.
The intentional taking of another human being’s life must never be condoned.  Most importantly the climate that gives rise to such acts must never be fostered.  Israel’s army, as well as America’s, too often makes tragic mistakes.  Yet they never intentionally target innocent civilians, and when a soldier does so he is condemned and brought to justice.  This distinction is most important.  Every life is equally precious.  I ask again, how can the murder of another human being be legitimized or celebrated?  How can one believe that such acts further a political agenda?   In the end, untempered zealousness and demonic hate consume the believer as well as their many victims.
Today my heart grieves.  Today I hold many pictures in my heart.  They haunt my dreams for a more perfect world.  I still see the terror stricken eyes of a mother holding her baby for the last time.  I cling to the pictures of Japan’s coastline swept away by the ocean’s fury.  And I hold the picture of the smiling and laughing Fogel children now silenced.  I also grieve with Aaron who this week mourns his children, Nadav and Avihu.  According to the portion they were killed because they offered a strange fire.  The Torah reports: “And Aaron fell silent.” (Leviticus 10:3)
But I refuse to remain silent in the face of such unwarranted death!  The confluence of this week’s portion, the Japanese earthquake and these recent murders teach us a lesson that we appear reticent to learn.   The greatest danger may be when people come to believe that they can bring about acts of God.
Such fires are intended for God’s hands alone. In our hands they consume all.
The Einsatzgruppen photograph. 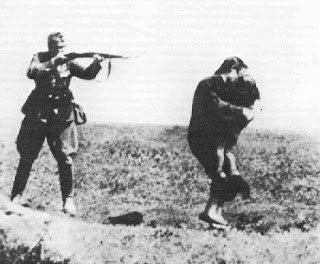 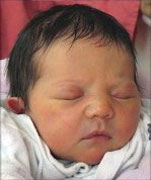 Moshe Sharon said…
The Parsha Shemini is about the completion of the inauguration of the Tabernacle. The number seven represents all things occurring within the natural construct of this finite world, while the number eight represents all things beyond nature, or infinity. According to Rashi, the eighth day was the day of re-establishing the eternal connection with the Almighty that we had lost when we stumbled and fumbled with the golden calf. Here at the beginning of this portion, we are witness to the momentous occasion of our reconciliation with our Creator, who is beyond all things natural and supernatural. Once Aaron had achieved atonement with the final offerings of the eighth day, the Shechina descended into full view and all of the people fell on their faces. G-d resumed His place among His people. Thus the Torah reminds us that we are a Holy people whose very existence as a nation is beyond nature. Therefore, the prime minister would do well to remember that G-d is the Guardian of Israel and that destroying Jewish homes gives the impression to our enemies that the Israeli government has abandoned the Jewish people who remain in Samaria leaving them at the mercy of the Arab cutthroats. The only way to prevent more killing is for the Israeli politicians to back up the Jewish heroes who are establishing their homes on Jewish land in the face of Arab hatred and, worse yet, Israeli government apathy. More at http://moshesharon.wordpress.com
3/24/2011