January 19, 2012
“Does kissing a stingray bring you good luck? Or breaking a mirror bring you bad?” a seventh grader recently asked. Thus began a conversation about superstitions. We talked about bendles and hamsas. We discussed the common middle school superstition of placing a spoon underneath your pillow and wearing your pajamas inside out to bring on a snow day.

I challenged our 7th graders to a friendly bet. Knowing the next day’s forecast, I suggested that our students place a spoon under their pillow to make it snow. If it did indeed snow I would donate one dollar to tzedakah for each student. If it did not snow they would each have to bring in a dollar to place in the tzedakah box. They refused the challenge saying, “There has to be snow in the forecast for it to work.” I wondered aloud, “Then why not just watch the Weather Channel?”

I challenged them further. “If you are wearing a red string on your wrist, is it then safe to run out into the street?” One student of course said, “It depends on which street we are talking about.” When I responded the LIE, all responded, “Of course not. That would be really dangerous?” So does a bendle provide a protective bubble around a person? Clearly not, our students agreed.

How then do such superstitions work? Do Jews believe in magic?

“Aaron cast down his rod in the presence of Pharaoh and his courtiers, and it turned into a serpent. …[A]nd the Egyptian magicians, in turn, did the same with their spells; each cast down his rod, and they turned into serpents. But Aaron’s rod swallowed their rods.” (Exodus 7:10-12) This week’s portion makes the point that our magic is superior to the Egyptian’s. Their magic is but sorcery. The Torah suggests that magic is what the other guy does. Miracles are what we do. Whether it is God’s hand or sorcery, miracles or magic, grace or superstition is perhaps only a matter of perspective.

Thus we believe in miracles but not superstitions. Miracles reach from heaven to earth. Superstitions suggest the reverse direction. While prayer might move upward, mastery of the divine does not. We cannot control the heavens by the wearing of a string or blue stoned jewelry. We do not invite bad fortune by breaking a mirror. We are not granted a year of good mazel by kissing a stingray.

I asked our seventh graders, “Will wearing a bendle guarantee you 100% on a test?” A wise seventh grader responded, “It might help give you some extra confidence.” There is great truth in this insight. If combined with study and learning, then a bracelet or necklace could indeed help. If it is a substitute for hard work then it is guaranteed to fail.

Superstitions play into the notion that no one chooses the more difficult path. Everyone likes the easy road. The current fascination with Kabbalah, and the trinkets its mystics hawk, is a symptom of our culture’s attraction with easy answers and simple paths. Judaism is anything but. It is instead serious. It is complicated. And yes it is also overwhelming and demanding.

Some of these same 7th graders heard these demands and helped to feed the hungry last month. I don’t know if they wore bendles or hamsas. I suspect some might have even kissed the same stingray that I kissed in Grand Cayman. I do know that their hands were busy for hours baking desserts for the hungry. I do know that their hands were overwhelmed serving the homeless and fulfilling Judaism’s demand that we better our world.

I also know that they did not tire. And that is Judaism—always the hard work, never the easy path, forever demanding, but also promising great rewards, found not in a year of guaranteed good luck, but in a moment of helping others.

Addendum: Here is the picture of your rabbi kissing a stingray. By the way the tattoo is a spray paint tattoo and a result of my very important job as Uncle Steve. 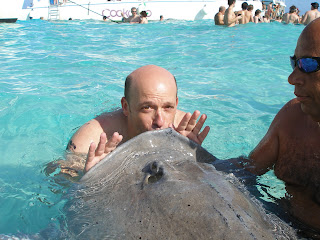