February 03, 2013
I admired Ed Koch.  In particular I liked his brashness.  I did not always agree with his views, but I could always count on knowing where he stood.  I could reckon with his ideas.

Following his recent death I was somewhat surprised to learn that he searched throughout Manhattan for its best burial spot, finally choosing a site in Trinity Church's cemetery.  The stone was erected prior to his death, and I recently saw a photograph of him walking beside it.  A haunting image!   But that is Koch chutzpah!  Here is what is written on the stone: "Edward I. Koch; Mayor of the City of New York 1978-1989; 'My father is Jewish, my mother is Jewish, I am Jewish.' (Daniel Pearl, 2002, just before he was beheaded by a Muslim terrorist.); Hear O Israel, the Lord our God, the Lord is one." 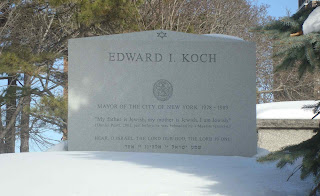 His funeral is tomorrow.  As I reflect on his legacy it occurs to me that history's greatest heroes should not require so many words.  Below is Ben Gurion's grave.  The grave sits beside his wife's, alone on a hilltop in the Negev desert, at the kibbutz he later called his home, Sde Boker. 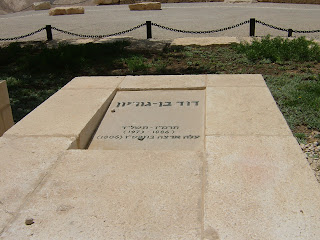 Judaism in its wisdom assigned no words to the lighting of a yahrtzeit candle.  I have often stammered over this lack of blessing, over the absence of prescribed words.  Now I see.  The silence speaks.

Addendum:  I missed that there is a concluding epitaph at the bottom of Ed Koch's head stone.  It reads: "He was fiercely proud of his Jewish faith. He fiercely defended the City of New York and he fiercely defended its people. Above all, he loved his country, the United States of America, in whose armed forces he served in World War II."