September 11, 2015
Below is my article that appeared today on ReformJudaism.org: Darkened Skies, Blue Skies: A September 11th Reflection.

It was a beautiful August morning, the temperature a comfortable 70 degrees. I was riding on my favorite flat, a road that extends for miles along the shoreline. My legs felt strong, and despite the gusting head wind, I was setting a fast pace. The dune grass blew in the breeze, the waves lapped at the expanse of sand, and when I looked up at the blue sky, I found it absent of clouds.

It was a perfect day. I could focus on my riding. I could contemplate the beauty of the moment.

And then it happened.

The perfect sky – nearly as deep and blue as a September day – reminded me not of the grandeur of God’s creation, but of a morning nearly 14 years earlier. Without warning, the perfect moment was gone, stolen. I was taken back to an earlier day’s blue sky, one that ended in darkness and clouds of smoke and ash. Memories of that terror-stricken day filled my thoughts.

Fourteen years ago, on what began as a glorious fall morning, I was driving to my office. I looked to the sky, appreciating the extraordinary day. There were no clouds, only the clear blue sky. I silently offered praise to God for this beautiful creation – and then I turned on the radio, only to hear reports of the first plane striking the North Tower. Soon I was headed home, driving east on the Long Island Expressway, the west-bound lanes eerily empty save the occasional emergency vehicle careening toward the city.

I lost no family members or friends that day, and thankfully not even one member of the synagogue I served, and yet I remain wounded. Fourteen years later, time has moved forward. Eight-year-olds have become 22-year-olds, college graduates on the brink of careers and the rest of their lives.

Time has moved backward, too. Years later, moments are too often stolen. Terror still finds its way into my soul. The sky stands as a silent reminder of that day. A perfect blue sky and a favorite morning bike ride turn into the drive back to our house after collecting my children from school, and my feeble attempts to explain to them – an 8-year-old and 5-year-old – what happened to our city. As I drove my children home that day, I knew the world they were born into had been forever changed. Fourteen years later, I still do not know exactly how.

I cannot escape the memories. Years later, tears interrupt mundane activities, tinging them with longing. I eye my mother’s favorite Passover candy in the supermarket. I recall my father’s long-ago advice about driving. I am haunted by melancholy as the skies remind me of yesterday, silently asking: Are they still near?

Judaism counsels that even at a wedding – the most joyous of occasions – we break a glass in remembrance of the ancient tragedy of the Temple’s destruction. In the midst of great happiness, we pause, if only briefly, to remember the event that forever transformed us from a people whose lives revolved around one Temple to a people dispersed and oriented toward many temples, from a people devoted to sacrifices to one devoted to prayer, Torah study, and acts of lovingkindness. Although the memory of that searing day is distant, its import is clear.

By contrast, although the memory of September 11th is clear, its meaning remains unimaginable. We have not yet figured out what this day might mean, for us or for future generations. We do not yet know if we should – or even if we can – break a glass in remembrance.

Nonetheless, we have come to understand this: The best of moments are still unexpectedly stolen and transformed into moments of sadness and pain. Blue skies can be darkened by memories, and ordinary moments can return us to tears of yesterday.

And yet on my return home, I am still pedaling. The wind, however, is now at my back, and the joy of riding into the future has found its way back into my heart. 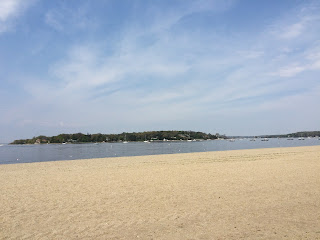