The Spiritual Truth of the Desert

May 02, 2017
Recently my wife and I visited Southern California’s Joshua Tree National Park. As we entered the park we briefly noted the sea of yellow wildflowers covering the desert floor. I wondered why so many were stopping to take pictures. Flowers are not so rare on the east coast. What are called wildflowers in the desert may very well be weeds in the green expanse I call home.

Later we were told that we were privileged to witness a once in ten-year bloom. The winter rains had produced abundant flowers. We initially took little notice. We were busy speaking with our son on the cell phone as we drove into the park. It was not until we lost reception that we began take in the desert’s beauty. I wonder how much is missed because we insist on remaining connected to those thousands of miles away rather than the world that stands before our eyes.

It was also not until were told by residents, “We have never seen anything like this before,” that we began to breathe in the beauty. Why is it as well that we must be told, “This is extraordinary!” in order to appreciate beauty? The Jewish tradition recognizes this impulse. It offers a myriad of blessings to recite before the wonders of nature. There is a blessing when seeing a mountain. There is a blessing for a rainbow. There is a blessing for the ocean. It is almost as if the ancient rabbis, who composed these blessings, are instructing us, “Get off your cellphone. You are standing in front of the ocean. Pause. Breathe. Look at God’s extraordinarily beautiful world. Say, ‘Thank you.’’

That’s not of course the words to the blessing, but it is perhaps the intent.... 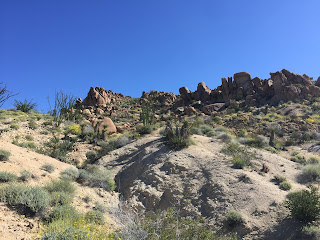