Memories of the Wild

January 25, 2018
Many years ago my family and I camped out in the Negev desert. We drove into Makhtesh Katan, a geological formation dwarfed by Makhtesh Gadol and Makhtesh Ramon. These unique formations are typically translated as a Little Crater, Big Crater and Ramon Crater. The term crater, however, is inaccurate because these were not formed by the explosive force of a meteorite but instead by the slow, painstaking power of water.

Rivulets of water, some as small as a creek and others as large as a river, eroded the rock. Over millennia these maktheshim were formed. When one enters and draws close to the canyon’s walls one is struck by the beautiful and colorful layers of rock. These formations can only be found in the Negev and Sinai deserts.

We slept on the desert floor, each in our own sleeping bags. We attempted to create makeshift pillows from the desert rocks. I heard verses in the night. “He came upon a certain place and stopped there for the night, for the sun had set. Taking one of the stones of that place, he put it under his head, and lay down in that place.” (Genesis 28)

The clear, night sky was awash with stars. “He had a dream; a stairway was set on the ground its top reached to the sky, and angels of God were going up and down it.”

I awoke early and waited for the sun to peak out above the horizon and for its rays to gently find its way within the rock walls. I remained in my sleeping bag until the desert air began to warm. The desert is surprisingly cold in the evening. Until the sun begins to bake the earth one would think that it is cool, fall morning.

I smiled to myself when I looked at my family, huddled near each other, and arrayed as if they were colorful logs thrown on the desert floor. I lit the fire and began preparing our Turkish coffee. (Ok, to be honest, our guide actually did. But it sounds so much better to say I did it.) The sun was only beginning to peak over the canyon’s walls. Best to get dressed in the sleeping bag, I advised our children. The air is still chilly.

We ate our breakfast and packed up the jeep and set off toward our next destination. The guide spoke about Ein Avdat, an oasis, off in the distance.

After the Israelites hurriedly left Egypt they camped in 42 different places. This week we read, “They set out from Succoth, and encamped at Etham, at the edge of the wilderness.” (Exodus 13)

Scholars suggest that Succoth was probably the site of the ancient city of Tjeku, the capital of the eighth province of Lower Egypt in the eastern part of the Nile delta. This region served as farm land for the Israelites and was the Egyptian gateway to and from Asia. It is apparently one day’s journey from the royal palace in Raamses.

And where is Etham? No one knows.

It was at the edge of the wilderness.

Sleeping within the makhtesh it appeared as if we were making camp at the edge of the universe. The stars served as our companions.

Could I ever find that camping spot in Makhtesh Katan, that figures so prominently in my memories, again? No. I am certain I could not.

But I can always find that story.

Sometimes the memory of a place is even better than the place.

Our story begins at the edge of the wilderness. 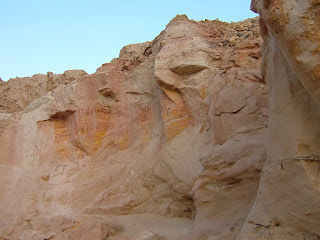