March 12, 2018
What follows is my sermon from this past Friday evening.

I would like to speak this evening about gun violence.  To be honest I have thought about little else or read about little else since the murders at the high school in Parkland, Florida nearly a month ago.  I imagine that many are equally preoccupied with this topic.  How can we not be?  17 people were killed.  14 teenagers and three teachers.  My friend was called to officiate at three of these funerals.  One of the teachers, Scott Beagle, was from Long Island and was known to many of us through Camp Starlight.  May his memory be for a blessing.

We have wavered between feelings of despair over the senseless loss of life and inspiration over the young teenagers taking up the fight for more sensible gun laws.  And so on this Shabbat evening I wish to weigh in with my feelings and thoughts about gun violence and the debates surrounding it, and to as well offer some observations about the arguments we hear.

Let me state my bias.  I do not like guns.  I do not want a gun.  I do not believe it would make me safer.  I do not like hunting—even though I grew up in Missouri.  I am perfectly content to leave guns in the hands of the police and the army.  And yet I know that our Constitution guarantees the right bear arms.  I recognize that some feel a gun guarantees them a measure of self-defense.  I realize that there are plenty of people who like to hunt.  And yet I strongly believe there are some reasonable controls we can put in place that would preserve the second amendment and guarantee our citizenry far greater safety.

First of all I see absolutely no reason why weapons designed for the military should have any place in civilian life.  The AR-15 is a rebranded M-16.  It is designed for soldiers.  It is therefore meant to kill and maim as many people as quickly as possible.  Read the article in The Atlantic by the radiologist who treated the victims of this most recent shooting.  The devastation this weapon causes far surpasses a pistol.  We used to have an assault weapons ban.  We need it back.

Second, the amount of ammunition one should be allowed to stockpile in one’s home needs to be limited.  At a certain point a gun collector becomes what would better be called, an armory.  We should be able to agree what is a reasonable amount of bullets for a person to have in order to guarantee for the needs of self-defense and hunting.  Can we agree that there is something terribly wrong when at a recent gun show in Florida one of the more popular items was a bullet proof backpack meant for children to use as a shield in the event of an attack?  And as well, in a booth nearby another purveyor was selling armor piercing bullets.  That is insane.  The notion as well that arming teachers will somehow make us safer is false.  More importantly it is an ugly transformation of the role of teacher, from one who is supposed to educate and help students realize their potential into a soldier or police officer.

Third we need better licensing and background checks.  If you want to buy something that is so lethal then you should be required to take regular tests, pay for a license and submit to background checks.  You should have to demonstrate mental fitness.  If you sympathize with the enemies of the United States then you can’t get a gun.  That seems kind of obvious to me.  But that is not our laws.

By the way Israel, who has been held up as a model by gun advocates, has very stringent laws about gun ownership.  You can only have one gun.  You can only buy 50 bullets.  You have to demonstrate that you really need the gun for self-defense.  All those pictures of Israelis with M-16’s are photographs of active duty soldiers.  In sum, it should not be easier to buy a gun than a car.

My feelings about all of this should come as no surprise.  For years I have consistently supported the need for better legislation about guns.  I thought that the massacre at the Sandy Hook elementary school would help to change things.  It did not.  And so I wish to also offer some observations about what might be different this time.

The first thing we should say loudly and clearly is this.  Thank God for our youth.  Change is often led by the young.  And perhaps we are witnessing a societal change.  We are seeing a group of teenagers transform their grief into action.  I am hoping that they will succeed as Mothers Against Drunk Driving succeeded before them.  I am praying that they can transform their pain into healing.  However, I am not going to only pray.  I am going to join them at New York’s March for Our Lives on Saturday, March 24.  If you would like to join me I would welcome your company and support.  These teens are an inspiring and articulate group of young people.

Some have criticized them for being too vocal.  But I bet every one of them would trade their new found fame for their friends.  I am certain they would rather have their friends by their sides and have nightmare free evenings of sleep.  I bet they would prefer to be worrying about colleges rather than rallies.  Emma Gonzalez was quoted as saying, “Adults like us when we have strong test scores, but they hate us when we have strong opinions.”  I for one say, “Keep screaming.  Keep shouting your strong opinions.”  We need lots of righteous indignation at this time.  We need you to fight for what we could not change.

I still believe that governments are supposed to make laws that attempt make us safer.  I am old enough to remember the changes surrounding drunk driving and seat belts.  I remember the days when my brother and I would roll around in the back of the station wagon on family vacations.  I also of course remember my father’s not so occasional threats to pull over if we did not stop wrestling and throwing each other around in the back.

Then we came to realize that seat belts save lives.  It sounds stupid saying it like that today, but not so long ago we complained about how uncomfortable they were.  For a while we wore the shoulder strap behind our backs.  I recall as well how we began to wear them in the front seats and not the back.  And then laws were enacted that mandated seat belts.  Car manufacturers improved and improved on their cars’ safety devices.  By the way kudos to Dicks Sporting Goods and other retailers for making changes about their gun sales.  I never really understood why a sporting goods store sold any guns but those meant for hunting.   So perhaps we are making progress.  I recall the movement of change.  A generation ago we did not wear seat belts.  And now one generation later the culture has shifted about car safety.  My children put on their seat belts as a matter of habit.  They scold their grandparents if they fail to do likewise.

This is how we make a better country.  First we write some laws.  Then we revise and refine them.  Eventually the culture shifts.  That is how Judaism thinks the world is supposed to work.  Tzedakah, as I often teach, is a law.  It is a commandment, mitzvah, required of everyone.  The NRA should be working to write gun safety laws.  They should have a vested interest in protecting the rights of responsible gun owners and the safety of the general population.  Good laws balance those two.  There are the rights of the individual weighed against the safety of the group.

But part of this debate is that many vocal gun advocates harbor a deep suspicion of government and the laws it creates.  They seem to abhor laws.  They find government suspect.  They view their right to bear arms in absolutist terms.  There is no compromise.  Any law limiting their second amendment rights is seen as unjust.  A family friend, who is an avid hunter and of course a gun owner, long ago dropped his membership in the NRA.   He argues, that if you are responsible gun owner you should advocate for good laws.

Not so long ago I spoke out for better airport security and more thorough searches following 9-11.  I figured I had nothing to hide.  I could sacrifice some individual rights for the sake of the safety of the group.  That is how community and country work, or are supposed to work.  When did controls or limits become synonymous with the elimination of rights?  Speed limits are not viewed as an infringement on individual rights.  When did gun control become synonymous with the abolition of the right to bear arms?

This loss of faith in government might very well be the largest problem.

If you are going to live with others, and be part of a community, and be a citizen of a country then you need good laws that guarantee the safety of the group.  Sure we are going to disagree about particulars.  I am going to give more weight to the first amendment over the second and others will reverse the order, but the laws allow us to live together—not so much in harmony but at the very least in safety.  We have to work to restore the premise that governments are to make laws that keep people safe.  The fact that there is so much disagreement over this foundational premise erodes the threads that bind us together as a nation.  You cannot enact good laws if a significant percentage of the population finds government suspect.

Everyone can’t do whatever they want.  The individual is secondary to the community.  That is what Judaism teaches.

We all have a responsibility to protect each other.  And that is our tradition’s most important lesson.  Pikuach nefesh, the saving of a life, takes precedence over all other commandments.  We have a duty to protect everyone.  That is what Judaism calls us to do.

We have a lot of work to do.  Let’s get started.  Let’s do more.  Let’s heed our tradition’s call.  Let’s make everyone safer. I pray.  May there come a day—and may it be very soon—when lock down drills are a footnote in our history books and we look back on this day as we look back on the days of not wearing seat belts. 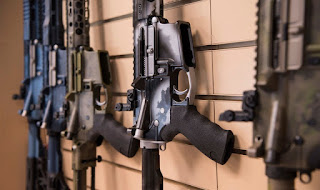