The Holocaust Memorial That Reminded Me of Each Life

April 18, 2018
This article also served as my sermon this past Shabbat evening, when my congregation marked Yom HaShoah.

I have often pondered how we can possibly give voice to the enormity of our people’s loss. Six million Jews were murdered. Of that, 1.5 million were children. Centers of Jewish learning were destroyed. Entire villages, and towns were decimated. Prior to the war, the Jewish population of Poland was the largest in Europe, with approximately three million. 9.5 million Jews lived throughout Europe.

I realize once again that two thirds of Europe’s Jews were murdered. It is impossible to comprehend the magnitude of the loss. These numbers are staggering. How can we take to heart the Holocaust’s devastation? These are numbers that intoned each and every year. They do not convey the human costs.

On two occasions in recent years I traveled to Europe. The first trip was to visit Budapest, Vienna, Salzburg and Prague with my wife Susie and children Shira and Ari. And the second was this past summer’s trip to Amsterdam. Throughout these cities, one can find small bronze plaques, no more than a few inches on each side, neatly tucked into the pavement of streets. We encountered them as we walked the streets of these European cities.... 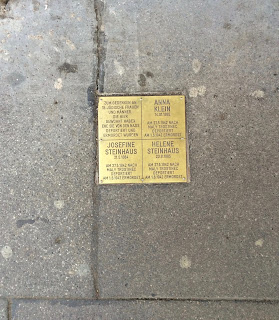