Some Talmud in Memory of Rabbi Aaron Panken

May 11, 2018
“Be of the disciples of Aaron….” And the Aaron I knew would have laughed. “My disciples? That sounds so pretentious.” He saw his work as forever unfinished. So how could others see themselves as his disciples? He would laugh and also say, “Pirke Avot is the best you can do.” But for now, this is what we are left to do. Be his disciples. And so what follows is this Shabbat's offering of remembrance and learning.


At most Shabbat services we often discuss the portion of the week. This week we read the concluding chapters of Leviticus in Parashat Behar-Bechukotai. At other Shabbat services we discuss the pressing issues of the day. This week, in fact, we learned that the Trump administration is not re-certifying the Iran nuclear deal. Seems like a moment for a rabbi to weigh in. I have argued that contemporary politics find voice within the verses of the Torah. On this Shabbat, however, I wish to speak about none of the above. Instead I wish to honor my friend, classmate and colleague, Rabbi Aaron Panken, who died last weekend while piloting a plane. Aaron only recently became the president of the Reform seminary. We knew he was just beginning to steer the Hebrew Union College in new and even greater directions.

Aaron loved Talmud. In fact he taught Talmud. And so on this Shabbat I decided that the best way to honor my friend would be to teach Talmud. I therefore looked to Daf Yomi. This is the project in which people read a page of Talmud every single day in order to complete the study of this vast Jewish text. It takes seven years to complete the project. The Talmud is no ordinary book. It is the compilation of rabbinic discussions and debates spanning the formative years of Jewish life, from the first to fifth centuries CE. Imagine rabbis who lived in different centuries and who at times even lived in different towns arguing on one page. The Talmud is a cacophony of opinions. Although I call it formative it would be a mistake to call it a law book. It is filled with tangents. It is riddled with technical and cumbersome language. Moreover it is written not in Hebrew but Aramaic, the lingua franca of the early rabbinic period. At one point you think you are learning about Shabbat when all of sudden you find yourself at Rabbi Hillel’s feet discovering what he believed to be the essence of Judaism. “What is hateful to you do not do to any person.”

I take occasional tours through its pages. I find it at times maddening, and often baffling. My friend did not. This was his home.

And so on this day the assigned reading for the Daf Yomi project is Zevachim 28. Of all the tractates of the Talmud it had to be this one. Zevachim is all about the sacrifices. This would almost certainly be the last of the tractates I would pull off my shelf. I am more comfortable with the discussions in Brachot, blessings. Avodah Zarah, the book on idolatry, is filled with some fascinating debates about how we draw lines between who is a Jew and who is not, about what is Jewish and what is not.  But Zevachim 28 is today’s charge. I quote from the opening lines: “The tail of a sheep sacrificed as a peace offering is burned on the altar rather than eaten. But if so, one who slaughters the sheep with intent to consume the skin of its tail the next day has intent to shift its consumption from consumption by the altar, i.e., burning the offering, to consumption by a person.” Sound confusing and daunting? It is.

Let us unpack its meaning. It is a curious thing that the rabbis would spend pages and pages discussing rituals that they could no longer do or even hope to do. The Temple, where we once offered these sacrifices, was long ago destroyed. Why would they even bother to debate its intricacies? Perhaps one might argue that they still held on to the belief that when the messiah comes the Temple cult will be rebuilt and we will again be able to sacrifice animals to God. Although they, like Jews throughout history, hoped that the future will be better than the past, (that is an essential Jewish belief) I am skeptical that they pored over these details so that they could be ready for the messiah’s arrival. I think there were other interests at play.

The more likely reason is that they wholeheartedly believed in machloket l’shem shamayim, arguments for the sake of heaven. They honed their argumentation over the seemingly mundane and inconsequential. I think this is the root of the Talmud. If you can argue about things that really don’t matter then you can learn how to better argue about stuff that really does matter. Here is an entire tractate devoted to what appears unimportant. Let us argue about it. Here, in the safety of the Talmud, we can debate. Perhaps all our divisive times require is a page of Talmud.

But my friend Aaron saw even more. The rabbis may have ostensibly been talking about sacrifices and the skin of a tail, but don’t let that tail distract you. (Aaron would have made any number of jokes about that tail.) What the rabbis are really asking is, “Does intention matter?” Does the intention of the person offering the sacrifice transform the sacrifice? If you intend to eat part of the animal then is the sacrifice no longer acceptable? Is your devotion tainted because you are looking at the sacrifice more like a barbeque than an offering? The discussion goes on for pages and pages. It is exhausting. I do not have my friend’s patience.

In some ways we have never really solved that question. Does intention matter? Do I have to pray with all my heart? Does my tzedakah donation have to come from a place of really wanting to give or just because I want to get off the phone as quickly as possible? When push comes to shove the rabbis always deferred to the following answer: it is better to do the right thing with poor intention than waiting around for good intentions that they worried would never materialize into actions. Better to just do what is required even with an empty heart than do the wrong thing even if that wrong thing is with a heart full of good intentions.

That is what I discovered today when I opened a page of Talmud in honor of my friend. But my reading remains incomplete. Because you can really only study with someone else. You have to sit across from a chaver, a friend. It’s never just about reading a page. It is always about discussing and debating what’s on the page—with a friend. That is how we have always moved forward.

One page at a time. 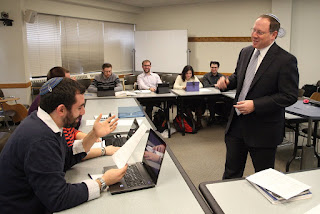