Remembering the Immigrants Who Believed in America

He came to this country in 1906 at the age of two. He was accompanied on this journey by his mother Leah and older sister Hannah, age six, and brother Grisha, age four. They traveled by train from Katrinaslav, a city in Ukraine, to the port of Hamburg. There they boarded a ship for the ten day trip to New York.

I am imagining my grandfather as a toddler. He clutched his mother’s hand for the two week journey. She held him in her arms when he became sea sick. She chased after him when he started crawling away from her on the train. She comforted him when he cried from hunger. I imagine his mother’s fear. Would they be allowed to enter? At the time, the United States was allowing able bodied men, and their families, into the country, but turning away those showing any signs of illness. People were, in particular, terrified of tuberculosis.

Leah wondered. Would she be turned away before being reunited with her husband, Moses?  It remained a possibility... 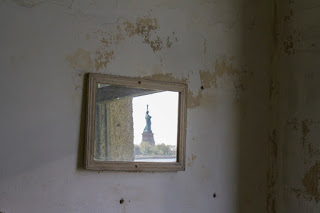