Antisemitism is a Sin: That's All There is to It

March 09, 2019
What follows is this week's sermon about antisemitism.

Typically I make every effort to be even handed when discussing contemporary controversies. But when it comes to antisemitism I do not think we should make any such attempt. And so I wish this evening to speak about Representative Ihlan Omar who continues to rely on antisemitic tropes when talking about Israel. She accuses Jews of dual loyalties and suggests that support for Israel is only, for example, about the Benjamins. She has offered apologies, but I think there is something more problematic at work. Representative Omar does not criticize Israel’s policies. For her Israel is more a myth than a reality, more a caricature than a living democratic state struggling with its many challenges.

For those who don’t get it, claims that Israel "hypnotizes" the world, or that it uses money to bend others to its will, or that its American supporters "push for allegiance to a foreign country," repackage falsehoods commonly used against Jews for centuries. People can debate the case for Israel on the merits, but those who support the state should not have to face allegations that their sympathies have been purchased, or their brains hijacked, or their loyalties divided.” (The New York Times)

If Representative Omar had visited Israel and even if she had come back with critical reports we might be understanding, although of course stung by her criticism. She has not. Instead she speaks about Israel as if it’s a cartoon where the good guy and bad are all-too obvious. It is a sad thing to say, and many scholars have noted, but Israel has become the Jew among nations. Antisemitism is now disguised as anti-Israel sentiment. We hear, “I am not antisemitic. “I am anti-Israel. I stand against Zionism.” But Zionism, and Israel, is the belief that the Jewish people have a right to a homeland of their own and that the place where our people exercises that right is in our ancestral land.

A growing number on the left, both here and now in England, think however that the real conflict is that Zionism is a distortion of Judaism. This could not be farther from the truth. Moreover such an idea is antisemitic. And antisemitism must be called out. Whether it is an offensive carnival float in Belgium in which Hasidic Jews are depicted with money and a rat or words by a representative from the political party you call your own, it must be called out. In fact if you call yourself a Democrat then you have even more responsibility to call out such antisemitism within your own ranks. It’s easy, and perhaps gratifying or at the very least affirming, when it is found on the other side of the aisle, but it’s even more important when it comes from the side for whom you voted. You cannot look the other way most especially when it comes from within your own ranks.

This is why I am so proud that the Muslim leaders who participated in the Shalom Hartman Institute’s Muslim Leadership Initiative came to Jerusalem to learn about why Israel—that is the modern and the ancient Israel—is so important and so integral to the Jewish people. And this is exactly what Representative Omar does not seem to get. She should similarly go to Israel and see it for herself. And she could then even come back and say, “The US gives too much aid to Israel.” Or, “I don’t want US dollars to be used at West Bank checkpoints.” Or, “I disagree with what the AIPAC lobbyists who met with me this afternoon said.” I might argue with her if she said such things—and I imagine such arguments would be quite heated, but that would be within her rights as a representative. That would even be in keeping with her responsibilities. She is not however doing anything even approaching this.

Her words are antisemitic. Moreover her antisemitism cannot be excused because she has suffered anti-Muslim attacks as for example what happened in West Virginia where she was likened to Islamist extremists who perpetrated 9-11. She should also not get a pass because she is a freshman in Congress. Antisemitism is antisemitism. It is the same whether it’s a Republican or Democrat, a liberal or conservative, the old or the young.

I don’t know what is in Representative Omar’s heart. I can never know that. I do not know what motives her. I can certainly judge her words and her actions. And on that count she comes ups woefully lacking. And that brings me to this week’s Torah portion. We read that the Israelites finished building the tabernacle, the portable sanctuary that accompanied them on their wanderings. The Israelites gladly donate to this project, giving of themselves in order to complete the project. The problem is that they had the exact same intention when they gave beforehand to another project. That time it was to build the golden calf. And that was of course the greatest sin the Israelites ever committed.

The Talmud comments: “One cannot understand the nature of this people. If they are appealed to for a calf, they give. If appealed to for the Tabernacle, they give.” (Jerusalem Talmud Shekalim) Both acts are motivated by the people’s desire to give. If we were to judge these acts by their motivations we might claim they were both good. They are of course not in any way the same. One is entirely sinful and the other entirely good.

People say that politicians on the left, such as Representative Omar, are motivated by their desire to seek justice for the Palestinians. And alleviating the suffering of Palestinians—the Gaza strip is for example becoming increasingly uninhabitable— is a noble goal. Alleviating suffering is always of course an unqualified good. This may or not be what is motivating Representative Omar. The larger issue is that this is entirely beside the point. Antisemitism is a sin and that’s all there is to it.

I pray. May we find the strength to say antisemitism is a sin in a loud and clear voice. May we find the courage to say this whether it is directed at our friends or neighbors, whether it is directed at leaders who agree with us on all other matters or leaders who disagree with us on every manner of thing. Antisemitism is a sin and that’s all there is to it. This is something that must never be papered over by high minded intentions.

Antisemitism is a sin and that’s all there is to it. Say this loudly. Say this clearly. 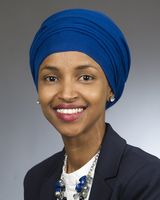