It's Because of the Mountain

March 14, 2019
This week we begin reading the Book of Leviticus, called in Hebrew Vayikra.  The opening words are: “Vayikra el Moshe—And God called to Moses.”  Curiously the last letter, alef, of the first word, vayikra, is calligraphed smaller in the Torah scroll.  Why is the alef smaller?

There are no good explanations for this tradition.  There are however plenty of sermons and interpretations.

The Hasidic rebbe, Simcha Bunim of Peshischa, offers an answer. He discovers a beautiful lesson in the small letter alef.  He teaches:

The letter alef is small just like Moses made himself small.  Even though Moses attained the greatest heights ever reached by man, he was unmoved by that fact and remained as humble as ever. When a person stands at the top of a mountain, he does not boast about how tall he is, because it is the mountain that makes him so tall.  By the same token, Moses felt that whatever he had accomplished was due to God, and he had no reason to feel proud of his achievements.

It’s an image worth pondering.  It’s a world worth working towards.

On whose shoulders do we stand?  To whom should we offer thanks? 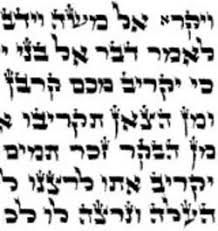