April 04, 2019
I just returned from the Reform rabbis’ annual convention. Imagine 600 rabbis in one room! Imagine the lengthy conversations. Imagine all the sermons and schmoozing. This year the convention was held in Cincinnati. It was wonderful to return to Hebrew Union College where Susie and I studied for four years. It was moving to return to the historic Plum Street Temple where we were ordained 28 years ago.

Plum Street Temple was completed in 1866. Its rabbi, Isaac Meyer Wise, founded America’s Reform movement. Isaac Meyer Wise Temple, as it is now called, is an extraordinarily beautiful sanctuary. Its architecture is a combination of Byzantine and Moorish styles that was then popular in Germany. It is meant to echo the golden age of Spanish Jewry. It was Rabbi Wise’s belief that America held a similar promise.

Will my grandchildren feel similarly?

We gathered for services on Monday morning. I was struck by countless incongruities. We sat in what was once the stronghold of classical Reform Judaism where English prayers (and German) were central, yet our prayers were marked by an abundance of Hebrew. Our singing was accompanied by guitar. We sang niggunim, wordless melodies developed by Hasidic rebbes who were an anathema to our founders. I stared at the gleaming pipe organs, whose voice once filled Reform synagogues but now stood silenced. Nineteenth century Reform leaders forbade tallis and kippah, yet virtually every rabbi wore these traditional garbs.

We read this week’s Torah reading, Tazria. It contains chapters and verses about leprosy. Leviticus is obsessed with rituals and in particular ritual cleanness. It enumerates countless details about what renders something unclean. Our movement’s first platform, written in 1885, wandered through my thoughts:

We hold that all such Mosaic and rabbinical laws as regulate diet, priestly purity, and dress originated in ages and under the influence of ideas entirely foreign to our present mental and spiritual state. They fail to impress the modern Jew with a spirit of priestly holiness; their observance in our days is apt rather to obstruct than to further modern spiritual elevation.

They believed the ethical should be elevated above the ritual.

I longed for new wisdom. Colleagues quoted Hasidic masters. Rabbis cited modern poets. We danced and clapped to our prayers. We often started our sessions late. The decorum and punctiliousness of our founders slipped away.

Would they recognize what they birthed?

I wish to bind the ritual to the ethical. I long for our prayers to feed our morals.

Every evening was marked by the testimony of remarkable and courageous leaders.

Roberta Kaplan, a civil rights lawyer and Amy Spitalnick, director of Integrity First for America, spoke about how they are using American law to go after the Nazis who organized the antisemitic violence in Charlottesville. Freedom of speech should not protect conspiring to do violence. We listened to Bryan Stevenson, the founder of the Equal Justice Initiative. He offered compelling words about the need for criminal justice reform. Is the measure of a nation’s greatness discovered in how it treats those accused of breaking its laws? Alabama’s prisons accuse us of falling short. Last night we were honored to meet Jim Obergefell, the plaintiff in the Supreme Court Case legalizing same-sex marriage. It is difficult to imagine the courage he must have summoned to allow a court to judge his love. Should anyone offer judgments about another’s love?

The prophetic spirit is alive. It is part of my prayers.

There is much to repair in our world. I pray for strength.

Would Isaac Meyer Wise recognize what he founded?

I am confident. He would recognize the spark.

And that is what we must kindle—in each and every generation, again and again.

I pray for courage. 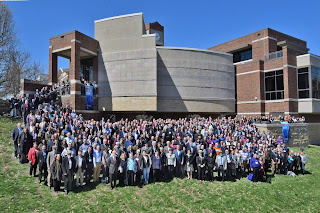 The Mayor of Jackson Heights said…
Steven, you ans Susan do such wonderful things for our Jewish community. My wife Susie's uncle was a graduate of the HUC. Rabbi Sydney Berkowitz of Toledo, Ohio.