It is because of the moon that we read about leprosy for two weeks rather than one. Most years this week’s portion, Metzora, is combined with last week’s, Tazria, in a double portion. Both are about leprosy. This year, however, is a leap year when we add an entire month. The month is added in the spring prior to Purim. Why?

The reason is simple. Our holidays are tied to the seasons of the 365 day solar calendar. Passover, for example, is the spring harvest festival. Sukkot marks the fall harvest. If we were only to follow the 354 day lunar calendar, as our Muslim neighbors do, the holidays would wander throughout the seasons. Then every year the holidays would be eleven days earlier than the previous year. And then, for example, Passover might occur during the winter.

Its connection to spring, our agricultural roots, and most importantly the earth would be lost. Therefore every two or three years we add a month. So Rosh Hashanah can wander between the start of September and the beginning of October but no further. Each holiday moves within a month’s window of the solar calendar.

During leap years, like this year, the double portions are separated into single portions. We therefore spend far more time reading Leviticus. So now we have to spend two weeks examining leprosy. And this is an unfortunate occurrence, to be honest.

But I am comforted by the moon.

The rabbis teach. The moon complained to God saying, “The sun is so much bigger than me. No one can even see me during the day.” God comforted the moon and said, “By you shall Israel reckon the days and years.” (Babylonian Talmud Hullin 60b)

Apparently we offer comfort to each other. Israel and the moon are joined. While the sun sustains life, the moon points to our celebrations.

The moon sustains our spirit.

This year especially look at the moon with a sense of pride. Although Israel’s unmanned rocket missed its lunar landing, it came very close. Some seventy years ago, when Israel’s existence seemed more hope than reality, more dream than achievement, when the state faced untold challenges, who could have even imagined that one day Israel would send a rocket into space? Who would have dared dream that in the week when Israelis once again exercised their democratic right to vote and yet again affirmed the vision of “to be a free people in our land, the land of Zion and Jerusalem” they would send a rocket to crash into the moon?

The rabbis teach: “By you shall Israel reckon the days and years.”

At this year’s seder, get up from your tables, and look up at the moon and say, “Next year in Jerusalem.” 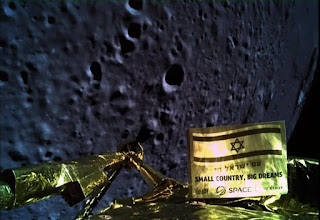