May 03, 2019
Yesterday marked Yom HaShoah, Holocaust Commemoration Day. It is the day set aside to remember our people’s loss at the hands of the Nazis’ murderous hatred. As we remember this devastating loss, we cannot help but affirm that antisemitism is still real and most tragically, still murderous.

Last year antisemitic attacks doubled in the United States. Six months ago, we witnessed the deadly attack at a Pittsburgh synagogue and this past Shabbat another at a San Diego area synagogue. It is sadly evident that we must remain on guard against antisemitism. The Board is diligently working on security upgrades for our own synagogue. And there will be security at upcoming services.

While we must remain forever vigilant and while we must improve security at Jewish institutions the most important response to terror remains the same. We must never bow to fear. And we must continue to proclaim, we are proud to lead Jewish lives.


I pray that my missing finger serves as a constant reminder to me. A reminder that every single human being is created in the image of God; a reminder that I am part of a people that has survived the worst destruction and will always endure; a reminder that my ancestors gave their lives so that I can live in freedom in America; and a reminder, most of all, to never, ever, not ever be afraid to be Jewish.

Again and again, we remember. I recall a few of the individual lives affected by the Holocaust. I urge you to read the stories of this year’s torchlighters. At this year’s Yom HaShoah ceremony at Jerusalem’s Yad VaShem, these six survivors were chosen to light the six memorial lights.

Their tales represent extraordinary stories of survival and loss. To these stories I wish to add another. It is the story about how my favorite children’s book, Curious George, came to be.

When the Nazi party was gaining popularity in Germany, Hans Augusto Rey, a Jewish salesman, knew he had to leave so he fled to Rio De Janeiro, Brazil. There, he met and married his old flame, Margret, who had also come there to escape the Nazis. Together, the couple soon moved to Paris in 1935.

When World War II broke out, the Reys realized they could not stay in Paris. They needed to make other plans. They again fled, narrowly escaping Paris a few hours before the Nazis invaded. They rode from Paris on a pair of bicycles that Hans had made. On their backs they strapped some food, a few of their possessions, and the manuscript of a children’s book the couple had been working on—a book about a mischievous monkey named George.

The Reys made it across the Swiss border and eventually found their way to New York, where they first published Curious George. That book, and its sequels, have been translated into dozens of languages—including the Reys’ native Yiddish. Children are still reading about George, his adventures, and the understanding, but always helpful Man with the Yellow Hat.

On this occasion, as I reflect on Yom HaShoah, I wonder how my childhood might have been different if this book did not accompany me, if the Reys had suffered the same fate as the six million. I would never have heard my mother reading over and over again, “George promised to be good. But it is easy for little monkeys to forget.” I wonder how my life would have been different if my mother did not affirm my curiosity through the Man with the Yellow Hat.

A book affirmed my nature and applauded the lesson that discoveries, and learning, begin with curiosity and that most importantly making mistakes, and even making a mess, accompanies curiosity, discovery and learning.

Today, I wonder how many other books could have accompanied me. I imagine there could have been six million more books.

The Holocaust haunts our people. It remains a library of loss.

But my curiosity, and embrace of life, remain undeterred. 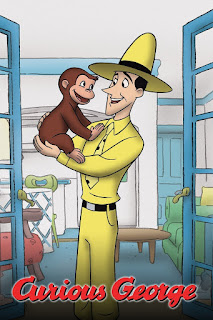