May 27, 2019
On this Memorial Day I wish to remember four chaplains. Here is their story.

On the evening of February 2, 1943 the US transport ship, Dorchester, along with two other ships, was sailing through the icy waters off the coast of Newfoundland, only 150 miles from its base in Greenland. A German U-boat spotted the ships and fired torpedoes at the Dorchester. The ship was struck. Almost immediately the captain ordered the surviving sailors to abandon ship. Within twenty minutes the ship would sink.

It was in those minutes that these chaplains became heroes. Panic and chaos set in on the Dorchester. The blast had killed hundreds. Countless were seriously wounded. Survivors groped in the darkness. Men jumped into the icy waters of the Atlantic. Others scrambled onto the lifeboats, overcrowding them and nearly capsizing the small boats.

According to survivors, four men instilled calm. They were four Army chaplains: Lt. George L. Fox, a Methodist minister; Lt. John P. Washington, a Roman Catholic priest; Lt. Clark V. Poling, a Dutch Reformed minister; and Lt. Alexander D. Goode, a rabbi. Quickly and quietly the four chaplains spread out among the sailors. There they tried to calm the frightened, tend to the wounded and guide the disoriented to safety. They offered prayers for the dying and encouragement to the living.

One survivor found himself swimming in oil-drenched ocean water surrounded by floating dead bodies and debris. Private Bednar recalled, “I could hear men crying, pleading and praying. I could also hear the chaplains preaching courage. Their voices were the only thing that kept me going.”

Another, Petty Officer John Mahoney, recalled trying to reenter his cabin. Rabbi Goode stopped him. The sailor was concerned about forgetting his winter gloves. Goode responded, “Never mind. I have two pairs.” The rabbi gave Mahoney his own gloves.

By this time, most of the sailors had scrambled topside. The chaplains opened a storage locker and began distributing life jackets. When there were no more lifejackets in the storage room, the chaplains removed theirs and gave them to four frightened young men.

As the ship began to sink, survivors in nearby rafts reported that they saw the four chaplains with their arms linked together, supporting each other against the slanting deck. Their voices could also be heard offering prayers. It is said that some Jewish sailors reported hearing the singing of the Shema. Shema Yisrael Adonai Eloheinu Adonai echad--Hear O Israel the Lord our God the Lord is one!

During WWII many soldiers sacrificed their lives in order to conquer evil. Some stories have become well known. Others less. A rabbi, priest and two ministers did not fight the Nazis with weapons. Instead they stood together and helped to conquer fear.

I do not wish for more to die defending our nation. I did not wish to add more names to our Memorial Day litany.

Today I recall the memory of these four chaplains. Their brotherhood represents what is so great, and even unique, about our country. Standing arm in arm we can indeed conquer fear. 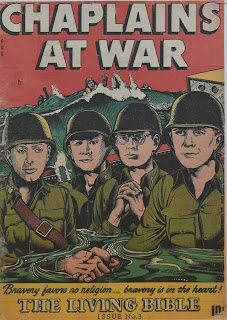