September 15, 2019
What follows is Friday evening's sermon on the occasion of the eighteenth anniversary of 9-11.

On Wednesday Susie and I dropped Ari off at JFK for the beginning of his year long journey. Aside from the emotions of seeing our son off as he begins his travels around the world, it occurred to me how ordinary this occasion was. I am not speaking of course about Ari backpacking to as yet unknown destinations and our expectations that we will soon receive random texts at some odd time of day and night saying something like, “Leaving Singapore, heading to Hanoi.” Or, “Decided to stay longer in Palermo.” I am instead speaking about how ordinary Wednesday, September 11, 2019 seemed. The airport provided its usual frustrations with all its boisterous honking and jockeying for a spot to drop him off. We hit traffic on the way home. I looked up when we were stopped on the Belt Parkway to see a large plane making a slow leftward turn on its approach to the airport.

Eighteen years ago I could not have imagined such a moment. I can still see the empty, blue skies over our backyard, after we had collected our then five and seven year olds from school. “Can we let them play outside?” Susie and I debated. I looked up from our backyard, and marveled at the sky’s blueness and its emptiness, save the occasional military helicopters loudly hurtling towards Manhattan. “We can’t keep them locked inside,” we finally decided. And then we hurried them in and out as we struggled to make up our minds over and over again. Everything stopped on that day. We felt as if it might forever stop.

Ten years ago we would have protested the day Ari decided to begin his journey. “Wait until Thursday to leave,” we might have said. This year I could not get over how ordinary and routine the day seemed. Of course I cried all over again as I tuned into the countless services, and most especially the service at the 9-11 memorial. I watched with renewed pain the remembrances held throughout the country, and even the one held in Israel. Still I did what I always do on any given Wednesday. It seemed like any other September day. I am not saying of course that the day 9-11 is not among our most wrenching and sacrosanct days. Americans attended services, watched any number of memorials on TV, or not so great made for TV movies. On Wednesday we reacquainted ourselves with the pained stories of those lost and those who died trying to save others. I think of the firefighters running up those stairs, sensing they might never walk down. Their photographs arrayed in The New York Times are still etched in my thoughts; they are forever before my eyes. I think of all those rescue workers, police officers, construction workers and volunteers who rushed to Ground Zero to help but now, years later, are plagued with unimaginable health consequences.

And yet, on this past Wednesday most of us went about our day like any other Wednesday in September.

Some things return to normal. We go to work. We go out to dinners. We go into the city for the theatre. There were days back then when I never could have imagined that someone could create, or would create, the most beautiful and moving show about that dark day. And, until this past Sunday I refused to go see Come from Away. We go to the beach. We go to the airport. And then again, there were days back then when we thought that going to the airport might never again be possible. We laugh. We sing. We cry—but no longer only about that Tuesday from eighteen years ago. Everything has not stopped.

And some things are never again the same. We are still afraid. We are afraid of travel. Before that day there was no place on earth beyond the travel destinations of our American can do attitude. Now we take those State Department Travel warnings seriously. Fear is lodged in our American hearts. We hesitate. Everything has not stopped, but there is a pause in our step, a hesitation in our decision making. “Is it safe?” we ask over and over again. “There are so many people there. It might not be safe to go watch the parade,” we think. We hesitate to meet new people. It is easier to stick with the friends we know. We pause before opening our hearts to strangers. “They could be…you know…” we think, sometimes quietly and sometimes not so quietly.

The hope that was the defining characteristic of America, the hope that inspired my grandparents to traverse the ocean and build a life here for themselves, their children, grandchildren, and now great grandchildren, is now overwhelmed by fear. Now our children openly say what would have been blasphemy to my grandparent’s generation, “Is this country really the best country in the world?”

Eighteen years later, I am not sure how to help banish this fear. But I have learned this. Fear is a matter of the heart. It has nothing to do with metal detectors, armed guards and bomb sniffing dogs. There can never be 100% safety and security. Not when riding a bicycle, driving in a car, flying in an airplane or walking on the sidewalk. There is no place on earth that is not touched by suffering and pain, violence and terrorism. We cannot run. We cannot hide. Eighteen years ago, we were naïve. We did not know then what we know now. That recognition, that knowing, that painful experience has made us fearful and afraid. But the heart is not our master. It does not rule our lives. We can control the heart. We can master our feelings and most especially our fears. As the Psalmist said, “Though they might surround me, my heart shall not fear. Though war should rise against me, even then I will be confident.” (Psalm 27)

And so we can banish the terror; we can rid our hearts of fear. How? By not stopping. By not pausing. By at the very least, not hesitating so much and so often. By approaching the world, and other people, with more hope. By seeing in others the possibility for new insights and new loves. By looking to the world, and its many destinations, not just as potential enemies who may very well be arrayed against us, but as beacons for discovering some new truths. We must once again open our hearts to the world's nuances. We must no longer divide the world into us and them.

How do we banish fear? By not stopping. By not pausing. By not hesitating. Perhaps that answer was only just discovered this past Wednesday. Perhaps that answer can only begin to be discovered eighteen years later. This truth might still be found. It is found in going about our day like it was just another Wednesday in September. That is the most important thing we can do, and perhaps even the bravest thing we can do. We can push fear aside.

Fear need not rule our hearts. 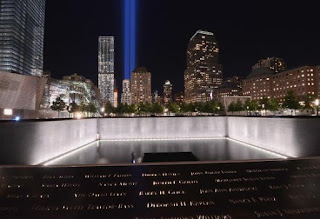