Thoughts on the Elections

November 09, 2020
Four years ago, I wrote: “Donald Trump will be our president. He is our nation’s choice. That does not mean we must remain silent—when we disagree. That also does not mean that we can say he is not my president if I did not vote for him. To respect our nation’s institutions means that we must accept the decision of our fellow Americans, even, or perhaps most especially when it is different than our own. I will not scream that the election results are unjust.”

I acknowledge that some are happy and feeling vindicated by these election results and others are saddened and feeling robbed. My goal remains how best to move past the contentiousness and become more unified. (Read Friday evening’s sermon about my worries that we might tear ourselves apart if we continue to attack each other and forget how the system works, “Beware of Bringing the House Down.”)

I have come to understand that our democracy is far more fragile than I ever realized. I never knew how much it hinges on convention and character. There are no laws demanding that a sitting president concedes and pledges to work on a smooth transition.

What a missed leadership opportunity to echo Senator John McCain’s sentiment from twelve years ago when he spoke about the significance Barack Obama’s election had for African-Americans and when he silenced those who booed the president elect’s name. Imagine how faith and hope could be restored not just for 75 million voters but for Democrats and Republicans alike if President Trump would say, “This is an historic election, and I recognize the special significance it has for women and for the special pride that must be theirs tonight.” A woman has become Vice-President Elect! Then the tears of joy, and sense of pride, could be all of ours to share.

There are as well no rules insisting that an election’s victor offers thanks and praise to his predecessor. As much as Democrats might find the latter distasteful and Republicans the former egregious, our combined trust in America’s democratic institutions turns on these very customs and traits. No laws can serve as substitutes for character. Without this our faith is eroded.

Let me also say loudly and clearly that there is no such thing as an illegal vote in a democracy. There may be invalid votes but not illegal ones. The difference is crucial. The term illegal implies that the person does not have the right to vote. Invalid, however, suggests that there was something technically deficient in a voter’s ballot. Moreover, the outcome will not change no matter how many times we count the tallies. This is not a mere 500 vote difference as it was in 2000. The difference in Georgia, for example, is approximately 10,000 votes.

I did not argue against the election’s results four years ago despite the fact that I may have been angered by the discrepancy between the popular vote and the electoral college results. Four years ago, I argued that Democrats should refer to Donald Trump as our president. Now Republicans should and must do the same—for the sake of a unified country. Soon Joseph Biden will likewise be our president. To nurse a loss or gloat about a victory does not serve our nation. Have faith in those who worked, and in some cases volunteered, at polling stations, spending countless hours ushering us into voting booths and then tabulating these results. Every vote is precious, and every person counts the same. Embrace our system, however flawed and imperfect it is.

So, I remain grateful to President Trump for helping to make peace in the Middle East and for firing up the electorate, most especially our youth. Look at how many millions more voted in this election—and during a pandemic no less. Because of Donald Trump’s 2016 success few will argue that elections don’t matter or that people can rest easy, not get involved and not cast their vote. In addition, Trump won more votes in 2020 than Clinton in 2016. Nearly 10% more eligible voters voted in this election than in 2016. That is cause for celebration in a democracy. That is something in which every American can, and should, take pride.

I wish the system of voting and counting was the same throughout the country, but it is not. How each state’s residents vote and how their officials count is a patchwork of cumbersome laws, but this remains our system. Four years ago, I urged Democrats not to talk about the popular vote or even Russian interference. This year I exhort Republicans not to talk about illegal votes or a stolen election. Work to better the system not to disenfranchise voters. Focus on the 2024 elections. Start organizing now. That’s what the system is about. This is what makes America a thriving democracy.

I continue to pray for the day when Democrats and Republicans will unite in common purpose and service to our nation despite never resolving their ideological differences. Remain loyal to these philosophies. Compromise on policies.

I choose unity over divisiveness. I choose our nation over political affiliation. 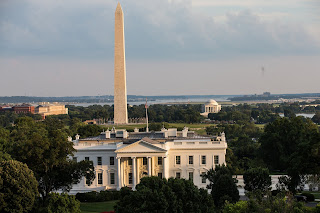