Stand Up and Light the Hanukkah Candles

December 11, 2020
According to rabbinic legend Hanukkah celebrates the miracle of oil. After the Maccabees defeated the Syrian-Greek army and recaptured Jerusalem, they discovered the Temple desecrated. They decreed an eight-day rededication ceremony but found only enough holy oil to last for one day. Lo and behold, a miracle occurred, and the oil lasted for eight days.

Usually when we retell this story, we imagine the miracle growing brighter with each successive day. On each of the days of this dedication ceremony, the Maccabees must have expected the light to go out or at least the light to grow dimmer. Instead, the light kept burning. And so, the eighth day appears more miraculous than the first.

Yet, the more important, and perhaps even more miraculous, moment occurred on the first day when the light was first kindled. I imagine a debate ensued about whether or not to light that wick floating in the cup of olive oil. Some must have argued against its lighting. Others might have retorted, “Let’s light it anyway and see how long it lasts. Even if it lasts for one day, that will be good enough.” I doubt there were few, if any, who thought the oil would last all eight days or that there was enough oil to last much longer than a few days.

Despite this, someone had to stand up and light the oil. Even though no one knew what to expect, or what the future days might hold, someone kindled the light. Someone had the courage to light the Hanukkah lights on that first night even though evidence and reality argued against it.

It is going to be a hard winter. The news is increasingly dispiriting. We cannot travel as much as we might like or certainly as much as we did in past years. We cannot see all the family and friends with whom we usually gather in December. But we can still light these Hanukkah candles. We can summon the courage of that individual Jew who stood up and lit the oil even though others thought it would never last more than one day. Some most certainly argued why even bother.

Why bother? Because we need the lights.

We require such courage. We are in need of such faith.

This year most especially courage and faith seem in short supply. Is it as simple as standing up and lighting the candles? Yes.

Today we need to be like that individual who lit the first Hanukkah lights. That act represents not a denial of reality but courage and faith in the face of reality. The dangers are likewise real. Uncertainty and risk torment our souls. And yet we can summon the courage of yesteryear. We can rely on the faith of our ancestors.

We can affirm light and life despite darkness and fear.

We can relish in the love of family and friends.

Stand up and light the candles. 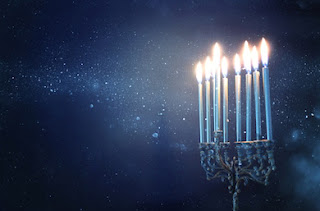