January 07, 2021
The Protocols of the Elders of Zion is an infamous antisemitic tract written in the early 20th century advancing the conspiracy theory that Jews seek to control the world through a secret cabal. Scholars have long suggested it was written in Russia around the time of deadly antisemitic pogroms in the early 1900’s.

In the 1920’s Henry Ford published 500,000 copies of this tract and distributed them throughout the United States to English reading audiences. Despite the fact that The Protocols of the Elders of Zion was long ago debunked, it continues to find audiences and sympathetic ears.

Today QAnon and its followers allege an equally outrageous conspiracy theory. A group of Satan worshiping pedophiles is running a sex-trafficking ring whose goal is the downfall of President Donald Trump. According to QAnon, among the ring’s followers are some Democratic leaders and liberal Hollywood actors who secretly meet in the basements of Washington DC pizza restaurants.

There are of course other debunked and discredited theories out there seeking to explain how nefarious forces stole what many people wanted to happen, namely the election of Donald Trump to a second term. The core belief of such theories is that there exists some mysterious all powerful other out to get the “good guys.” It is now painfully obvious that far too little is being done to protect us against these dangerous ideas.

As Jews we should know the deadliness of such conspiracy theories. Their dangers were on vivid display yesterday when a violent mob stormed the capital and delayed the work of Congress as they were meeting to sanctify the will of the majority of American voters. Shame on the leaders who encouraged them. Shame on the leaders who granted them the space to amplify their distorted views. Their actions sullied the reputation of every American. Let all our elected leaders stand with the institutions they serve, speaking truth against such insidious dissension and the kindling of violence.

Conspiracy theories cannot be refuted by facts...
This post continues on The Times of Israel. 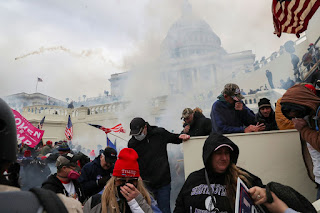