On Yom Kippur, Lift Our Chair

September 15, 2021
In Jerusalem’s Breslover synagogue, located in the ultra-Orthodox Mea Shearim neighborhood, there is aa beautifully carved ornate wooden chair placed near the Ark. No one sits in it. The chair once that of Rebbe Nachman, the founder of this Hasidic dynasty.

In 1808, in the days before Rosh Hashanah the butcher of Teplik Ukraine made this gift for the rebbe. The rabbi was so impressed with the craftsmanship, and most especially with the fact the butcher spent so much of his free time during the prior six months making it, that Rebbe Nachman loved to sit in the chair. He felt that the kavvanah, intention, of the butcher helped to lift his prayers.

After the great rabbi’s death, this chair became a symbol of the Breslover Hasidim. How it found its way to Jerusalem is the stuff of legends. There are two stories.

The first is most likely closer to the truth. During the Cossack pogroms of the 1920’s, Rabbi Tzvi Aryeh Lippel cut the chair into pieces in order to carry it to safety. He walked, and some say ran, twenty miles to the nearby town of Kremenchug where it was then hidden by the Rosenfeld family. In 1936 Rabbi Moshe Ber Rosenfeld brought the chair to Jerusalem. It was restored in the late 1950’s by artisans from the Israel Museum, and then again in the 1980’s. The chair was then placed in the synagogue where it can be seen to this day.

The second is the story I prefer to tell. When the Nazis invaded the Ukraine, Rebbe Nachman’s disciples realized that the only way for some of them to survive was to run and to scatter throughout the world. But what should they do with the Rebbe’s chair? And so, they decided to cut the chair into small pieces and every disciple would carry a piece of the chair, and the intention of their great rabbi, as they ran for their lives.

After the war, the Rebbe’s many disciples and their descendants found each other in Jerusalem. Miraculously every single one who carried a piece of the sacred chair survived the war. In Jerusalem, they painstakingly reassembled the chair. It looked just as beautiful and majestic as the day it was made and presented Rebbe Nachman. Was that their belief or reality? Does that matter? They felt their Rebbe’s prayers in the reassembled chair.

Find that piece you wish to carry. Hold on to it. Assemble it together. Our survival depends on it.


Rebbe Nachman teaches: “The most direct means for attaching ourselves to God from this material world is through music and song.”

On this Yom Kippur let us assemble this chair and lift it together. 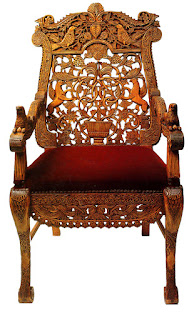