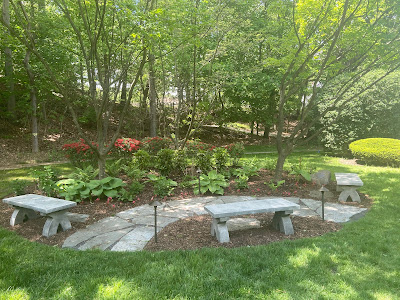 Shalom and welcome to Congregation L’Dor V’Dor. I am Rabbi Steven Moskowitz, and I am so pleased that you have joined us for this special occasion when we dedicate Annie’s Garden in memory of Annie Bleiberg, a longtime member of our synagogue community…. I had the privilege of serving as Annie’s rabbi for almost eighteen years. It was one of my greatest honors that she chose to call me rabbi. Hearing someone say that who has lived through the history that I only study and teach about feels especially weighty.

And sometimes, when I am reading and learning about the Shoah, I can still hear Annie’s voice in my ears. I can still hear the words she would offer to our students when she came every year to our sixth-grade class to speak about how she survived the Holocaust.

I recall how she would tell them how her life was similar to theirs before the Nazis invaded her native Poland. I remember many things, but a few notes from her story are deserving of mention. She told the students how when she and her family were crammed into a train car heading for a death camp, her father managed to pry open the small window with the tools he had smuggled on the train. Men, and boys, squeezed through the opening and jumped first. And then it was the women’s, and girl’s, turn. The last boy became scared and so Annie who was to be the first girl jumped in his stead and then he after her.

By then the guards on top of the train discovered what they were doing and shot and killed that boy when he jumped. Annie’s last memories of her mother and sister, who were murdered in that death camp, is saying goodbye to her sister in that cramped train car and the feeling of her mother’s hands pushing her from behind to help her squeeze through the window. She never saw them again. Only she and her father managed to survive. Still, even after her many attempts to avoid capture, the Nazis did manage to find her when a former classmate identified her as a Jew. And yet, she would emphasize to the students not that neighbor who turned her in but the other people who hid her or gave her a morsel of food or offered her a warm bath when she was on the run. There were good people who helped her survive.

She spent nearly one and half years in concentration camps. She would try to convey to our students how terrible the experience was in the camps. She was always hungry. She became weak and emaciated. And then she would often tell the students how she and three other girls would share their daily rations. They used one of their tea rations, or what she would tell them was more like dirty water, to color their cheeks. That way they would not look as pale as they actually were. And looking healthier meant one more day of life. And then she would often point her finger and say, “Living is worth it. No matter how bad things seem, life is precious.”

Then she would conclude her story by saying, “Am Yisrael Chai!—the Jewish people lives.” We would then give the students an opportunity to talk about what they heard and come up to Annie and ask questions. They would often want to see her number up close: 38330. Some would want to touch her arm and feel the tattoo and she would let them. She never covered her number up. She wanted the world to see it. Her arm served as testimony against the Nazis and the evil they perpetrated, but also of course witness to her survival.

I would often drive her home after Hebrew School concluded. In the car, we would talk about what she had just shared. I had this sense that telling her story was both simultaneously invigorating and exhausting. she would often say, “You know rabbi I leave out some of the details out when talking to such young students.” I remember thinking, “There were worse moments than jumping off a moving train on a snowy winter night? There were worse memories than drinking dirty water tea and eating a half slice of bread every day?”

On one occasion, she told me the following, “We used to have to squat to go to the bathroom at the edge of these latrine pits. Sometimes people were so weak that they fell in and drowned in those pits. On other occasions the Nazi guards would push people into those pits, and they would drown.” Even going to the bathroom was dangerous. In the camps even that most mundane and basic of human things could mean death. The Nazis robbed Jews of their humanity.

I cannot explain why that is the memory I can never forget. Perhaps it was because I had this feeling that Annie needed to share it and speak it out loud but felt she could not tell such a horror to our young students. She wanted them to remain hopeful. Her goal when telling our students was to instill hope. Even in the midst of sharing the terrors that she experienced, she wanted to protect our children. She did not want them only to see antisemitism and death. She wanted them to see survival and life.

Annie did survive. She married and had a daughter. She celebrated the b’nai mitzvah of grandchildren as well as weddings. She was present for the birth of great grandchildren.

She wanted our students to remember the Nazi evils but also see survival and hope. And that of course is the point of our garden so aptly named “Annie’s Garden.” In the winter there will be its barren trees and bushes and its cold, stone benches. I will then imagine her tumbling in the snowbank when Annie tried to evade her Nazi tormentors. And then every year, around this time, its bushes will start filling with color and its flowers will start blooming. And I will recall her concluding message of hope and her words. “Life is always worth it. Am Yisrael Chai!”