The Wilderness Light Is Nearby

July 22, 2022
Ed Yong writes: “More than a third of humanity, and almost 80 percent of North Americans, can no longer see the Milky Way. ‘The thought of light traveling billions of years from distant galaxies only to be washed out in the last billionth of a second by the glow from the nearest strip mall depresses me to no end,’ the visual ecologist Sönke Johnsen once wrote.” (“How Animals Perceive the Word," The Atlantic, July/August 2022)

I can still recall those few, miraculous times when I witnessed the nighttime sky iridescent with millions of stars. One instance was many years ago when I was hiking in the Sinai desert. There, after the light of the campfire was extinguished, I looked up to see the blackness filled with innumerable stars. When I look up from my backyard, I can often see a few stars, but nothing as luminous as when I turned my eyes upward from the Sinai wilderness.

That difference is only a matter of a billionth of a second!

These days I have been marveling at the images from the Webb Telescope. I did not know what the Carina Nebula was before last week, but I have now discovered it is breathtaking and beautiful. There is the Southern Ring Nebula, Stephan’s Quintet and even SMACS 0723. Science reveals nature’s majesty.

One of the blessings of the pandemic—and I hesitate to extol its blessings while we are still struggling with its disruptions and reckoning with its losses—is how it turned us toward nature. For those first months most especially God’s handiwork was the only spectacle we could attend. And I suspect this might be why I became captivated and intrigued by Ed Yong’ article.

In it he explains that every animal lives within its own sensory bubble, called Umwelt. Its perceived world is its entire world. Only human beings can appreciate the Umwelten of other species. Only human beings can expand their vision and broaden their concern to other worlds. Because of this we have the added responsibility to care for the earth and its creatures.

And then I turned to the Torah and happened upon this verse: “Let the Lord, God of the spirits of all flesh, appoint someone over the community…” (Numbers 27)

Again, I was struck by a phrase. The spirits of all flesh. Does this point to animal spirits? There is the divine spirit in all creatures, in all of nature.

The majesty of nature is not restricted to canyons and mountains. It can be found in the wilds of perception—the sensory spaces that lie outside our Umwelt and within those of other animals. To perceive the world through others’ senses is to find splendor-in familiarity and the sacred in the mundane. Wonders exist in a backyard garden, where bees take the measure of a flower’s electric fields, leafhoppers send vibrational melodies through the stems of plants, and birds behold the hidden palettes of ultraviolet colors on their flock-mates’ feathers. Wilderness is not distant. We are continually immersed in it. It is there for us to imagine, to savor, and to protect.

Although I can still remember the stars illuminating the Sinai’s darkened sky, wilderness need not remain so distant.  It can be discovered in my backyard. 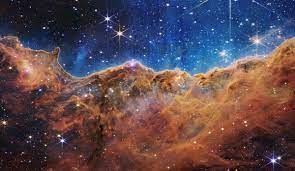