Apples, Honey and the Bees

September 22, 2022
I am thinking about apples and honey.
On Rosh Hashanah we dip apples in honey. This custom originated when Jews first made their way to Europe where apples could be found in the fall. During biblical times we were more familiar with those fruits found in the Middle East such as figs and dates, and most especially pomegranates.

In addition, even though the Bible calls the land of Israel a land flowing with milk and honey it was not bee honey to which it referred but instead date honey. And so now I found myself thinking about bees.

Many have read about the collapse of the world’s bee population. This does not have to do with honeybees who are raised, like other farm animals, for their honey and were brought from Europe to the American colonies in the seventeenth century. It does involve the ordinary bees we occasionally see buzzing around the flowers adorning our lawns. It is this indigenous bee population which is dramatically decreasing. While scientists debate the causes for this precipitous decline, there is little doubt that the numbers of native bees, as well as bumble bees is far less than it should be.

We depend on these bees to pollinate flowers and crops. Without them there will be less beauty and nourishment in our world, and maybe even less coffee. We depend on their tireless work. The bees’ work is extraordinary. A grain of pollen here or there eventually amounts to something grand. It eventually amounts to something larger and more monumental than anything we can imagine.

I look to my garden and watch as a bee flies from one flower to the next. I do not know or even see what might become its finished product. What wonder and amazement the tiniest of creatures adds to the world.

Just like the bees who fly from one pollen patch to another, so too are we expected to bring a measure of beauty and compassion to the world at large. When I taste the apple dipped in honey I am thinking about the honeybees but I am also thinking about the ordinary bees whose names I do not know, and whose names may soon be lost to extinction, and I wonder what beauty they provided for which I can now give thanks and what nourishment they sustained for which I may now want.

I do not know the work of their little wings. And yet I can imagine it, and taste it, as I recite the blessings for the new year. Perhaps it will give me strength to do more. Perhaps I can bring a small measure of compassion and sweetness to the world around me.

This new year I resolve. Let my work likewise remain hidden. Let my pursuits give flower to things as grand and beautiful, nourishing and healing, as the flowering pomegranate tree.
I give thanks to the bees. 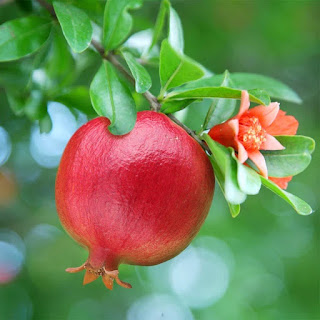