November 10, 2022
There are no parallels in ancient near eastern literature to the story of Sodom and Gomorrah. The Bible’s tale stands apart. Moreover, this episode in which these sinful cities are completely destroyed is referenced not only in this week’s portion but in several other instances in the Torah.

Rabbi Gunther Plaut (1912-2012), a Reform rabbi and author of an exhaustive commentary, argues that “only a historic cataclysm of startling proportions could have impressed itself so deeply on popular memory.” These cities were situated at the southern end of the Dead Sea. There, even the air is thick with the smell of salt and sulfur from its mineral deposits and formations. Listen to the tale. “The Lord rained upon Sodom and Gomorrah sulfurous fire.”

In addition, a fault line runs through this area, extending from Armenia to Central Africa. Scholars suggest, the rift valley is the result of a catastrophic earthquake. If its magnitude was significant, the earthquake could have raised the Dead Sea’s waters and flooded the valley, including the cities of Sodom and Gomorrah.

Perhaps there are natural explanations for this story. That is not, however, how the Torah frames this tale. Instead, it offers two related lessons. On the one hand, it is an illustration of the closeness of Abraham and God’s relationship. God thinks, “Shall I hide from Abraham what I am about to do since Abraham is to become a great and populous nation and all the nations of the earth are to bless themselves by him?” (Genesis 18) Abraham and God are partners. God does not wish to do much without conferring with him (and his descendants).

On the other hand, the Torah emphasizes that God’s justice is exacting. Abraham asks, “Far be it from You to do such a thing, to bring death upon the innocent as well as the guilty, so that innocent and guilty fare alike. Far be it from You! Shall not the Judge of all the earth deal justly?” Thus, the only reason why these cities were destroyed is because every single resident town is bent on evil. All try to accost (rape!) the messengers who have taken up shelter in Abraham’s nephew Lot’s home.

I wonder. Was this story written to justify a Pompei-like destruction of these biblical cities? To the Bible’s authors only one thing could justify the utter destruction they witnessed or were told about. All were sinners. If God’s justice is exacting and perfect, then read the signs. The cities were destroyed. Blame its residents! Only those who are deserving receive such punishment—unless, and only if, God’s mercy intervenes. Or, as in the case of Jonah and Nineveh, the people repent of their evil ways.

And yet, life does not follow such neat categorizations. It is easy to point fingers at others and say, “They must have deserved such punishment.” But I want no part of such finger pointing and casting judgment on others. Life, with its ups and downs, pains and sufferings, successes and even rewards, are not evidence of God’s love or God’s perfect justice.

The Torah is not about earthquakes. Our faith cannot, and should not, seek to justify hurricanes. Instead, it teaches that if we want justice (or something approaching perfection) we must partner with God. We must be open to this conversation.

Like Abraham we must listen for God’s call to “do justice, love mercy and walk humbly with God.” (Micah)

It might look like God’s punishment. One might be tempted to say, “They must have deserved this.” Instead, we must avoid such temptations. We must be open to asking, “How can I partner with God and bring God’s healing to the pain I see raining down.”

It was up to Abraham. It is up to us. 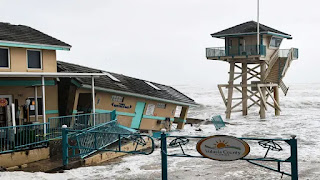